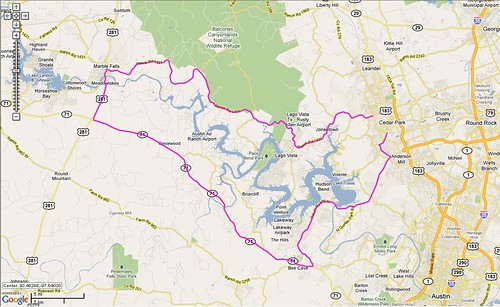 The ROT Rally was this weekend but I didn’t go. Maybe someday I will head downtown to check it out. Just not this year. Instead, I went for a really nice ride on Sunday morning. When I left my driveway, the ground was wet with a recent light shower but then just out of my neighborhood the roads were dry and the sky was filled with puffy white clouds. I topped off the tank at the gas station (averaging about 63 mpg now) then headed down 620. We drove down to Lakeway the previous weekend, so the route was still fresh in my mind. I knew it would be really fun to ride 620 on the bike and it didn’t disappoint. The downhill by the Oasis and Steiner Ranch towards the dam was really enjoyable, and there were hardly any cars on the road. I kept it at the speed limit which was I think 65mph so not too slow. I rode all the way past Lakeway the took a right at Bee Cave and took Highway 71 northwest. It’s funny but while riding it seems like the time just flies by. The ride down 620 seemed like it took only a couple minutes, but I’m sure it must have been about 20 or more. Anyways, 71 was a nice stretch also and before I knew it, I was at 281 and heading north into Marble Falls. I wish I had extra time to explore that town on the bike or even find a nice coffee shop, but I knew that the kids were probably awake and waiting for some breakfast. So I started east on a stretch of road that is one of the best (supposedly) in Central Texas. There was almost no traffic the whole way from Marble Falls to Lago Vista and the sun was high enough that it wasn’t in my eyes too much. The stretch of 1431 between the nature preserve and Lago Vista is so much fun, I cannot wait to go back and ride it again. Driving it in a car just cannot compare to riding it on a motorcycle. So far this ride was the most fun I have had on my bike.

Nice video of a ride in Thailand. 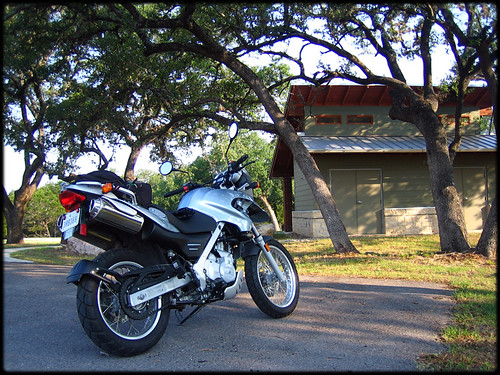 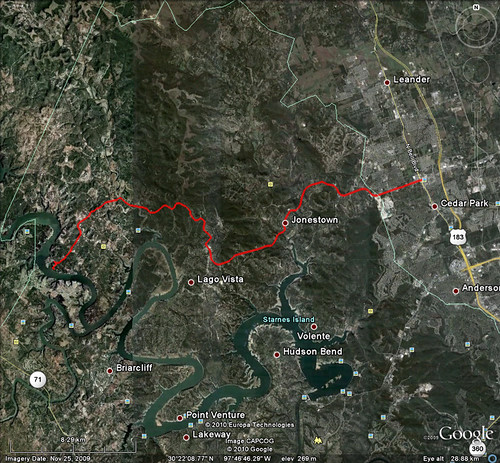 I went for a couple nice rides this weekend and put 179 miles on the bike. On Saturday I rode up Parmer north past 1431 where it turns into Ronald Reagan Blvd. I had never been up that way before, so it was fun to head out somewhere new. The street was nice and deserted: only a few cars and a lady riding her trike were on the road with me. Soon I found myself all alone riding past older homes on their plots of land and a few sprinkles came down from the sky. The temperature was perfect, in the low-70’s. I rode to the end of that street, where it Ts at 2238 and I took a right and headed towards Georgetown. The low-fuel light came on so I stopped at an Exxon and filled up the bike and had some water. 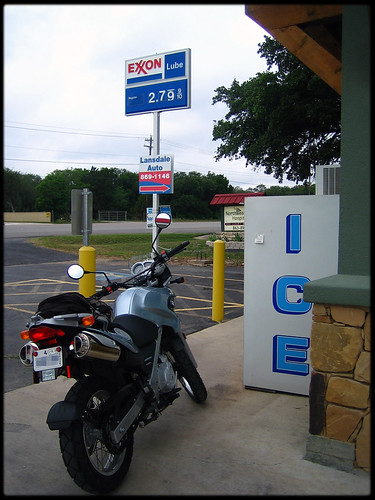 Crossing I-35, I continued on the road towards the town of Weir and then Granger, where I went the previous week. I decided to head around the lake again and I took a little break near the dam. 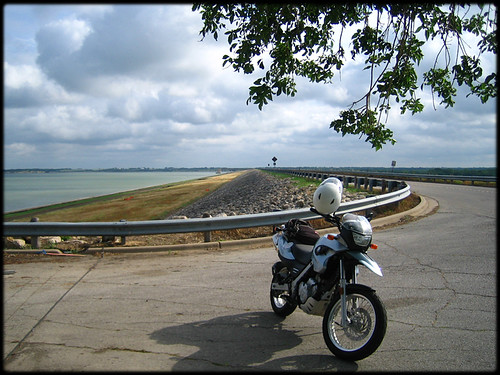 It was here that I put in the earplugs to try them out. I only rode a couple miles before I decided I didn’t like the isolation so I took them out. Next I headed down 95 through the town ofÂ  Taylor. The winds were pretty strong, and heading south at more that 60mph was difficult and not at all enjoyable. I ended up pulling off the main highway and rode on some county roads, so I could just cruise at a slower 35-40mph speed and take in the sights This was really enjoyable. The people who lived in the houses I passed were all friendly and waved as I rode by. Returning to Taylor and route 79, I headed west back towards Hutto, then Round Rock where I turned south and rode through Pflugerville and Wells Branch near our old house. I eventually made my way to Lonestar BMW/Triumph where I took a nice little break and checked out all the nice bikes. They had a G650 GS like mine there, but it was a police model with sirens and lights. Was kinda cool, but also a bit odd seeing my bike kitted out like that. After that I headed back home via Rutland, Metric, then Parmer. It was a total of 132 miles and a fair share of regular in-town riding.

Sunday morning I struck out west on 1431 from Cedar Park. I only went as far as the outskirts of Jonestown, where I turned right on Nameless Road. This is another road sign that I had seen many times and wondered about. This time, I saw two bikers on their Harley’s leaving Nameless Road, so I decided to go check it out. It’s a pleasant little 45mph two-lane road with a lot of elevation changes and a few twisties to keep it fun. I passed four other motorcyclists on this road, I think they were coming from Leander towards 1431 and then Marble Falls. 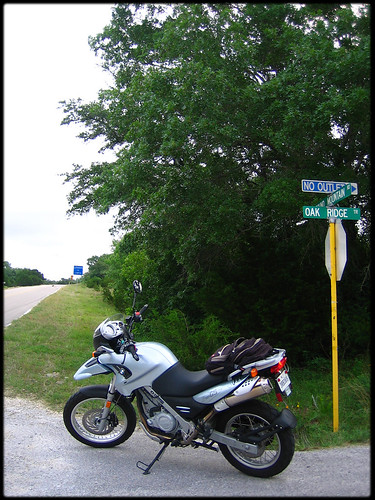 I didn’t have too much time so after a little side trip down Round Mountain I turned back and headed to 1431. I knew that I needed to pick up some breakfast tacos so I decided on Rudy’s. I went down Lakeline Blvd south, Cypress Creek, Anderson Mill and then took a quick 65mph run down 620 to get the tacos. After that, I was back home with the breakfast delivery for the family. A nice 47 mile Sunday morning ride in beautiful weather.

A couple things I noticed while riding this weekend: