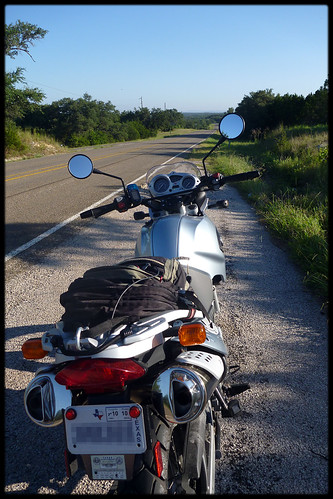 The other weekend I went for a nice long ride out to Pedernales Falls State Park. The morning air was so crisp and clean and smelled great. When I arrived at the park, it was already getting hot and when I hided down to the overlook I was sweating like a pig! It didn’t help that I was wearing my Revit overpants and Gaerne boots. But I did get to try out something that I heard about on Sidestand Up: cooling down using a wet shirt and letting the wind bring down the temperature. It really works! My textile (not mesh) jacket isn’t really made for summer riding, but it does have vents in the front and back, so air can pass through easily. What I did was to dunk my undershirt under the park’s bathroom sink and get it all wet from the chest up. Then when I was on the road at about 30mph and up I was nice and cool. It really did work! The only problem was that my shirt is the synthetic athletic shirt that wicks away moisture real quick. So after about a half hour of riding, it wasn’t so cool. Maybe I will try a regular cotton shirt next time.

After leaving Pedernales, I headed north and visited Inks Lake State Park. (I have a park pass, so no need to pay admission) While Pedernales only had a few visitors who were hiking or fishing, Inks Lake was packed with picnickers and boaters. It was kind of a madhouse. I pretty much just used their restroom, cooled down again, then rode around the park a bit before leaving. The ride home via Highway 29 was fast and fun and I was back home around lunchtime. Another nice Sunday morning ride!