I’ve wanted a motorbike ever since I was in High School back in the mid 80’s. One of my best friends had a Vespa P200 and we would go riding around to record stores and stuff. It was so much fun and I think that is where I got the bug. But I wouldn’t get a bike until much later. In 2003 I finally got a little 1980 Honda C70 project bike, fixed it up, and enjoyed riding it for a few years. It was fun, but really limited because of its lack of power. Top speed was about 43mph (downhill and with a tailwind).

In May 2010 I sold the Honda and bought a 2007 BMW F650 GS, which has been one of the dream bikes for me. I am loving it! I also want to do some motorcycle camping, and the BMW should be perfect for this. I also enjoy LD (long-distance) riding and have completed one SaddleSore 1000.

The blog name “motofuji” is my last name (fujimoto), switched up. You can find me on twitter, facebook, google+, and many other places. Ride safe! 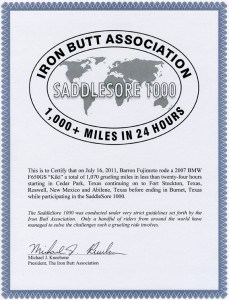 One thought on “Me”