While doing a Google search on â€œHonda C70â€ last night, I stumbled upon the Mad Bastard Scooter Rally â€˜04, put together by CMG, a Canadian motorbike online magazine. I love to read stories like this. A group of several (6?) scooterists go on an endurance rally around Lake Ontario on scooters, including a Yellow 1981 Honda C70! I wonâ€™t give away the ending, whether they made it or not, but itâ€™s a pretty cool story. You can also read about the â€˜05 Rally here, although no C70â€™s made the trip in â€˜05.

I have a fascination about motorbike journeys, and have been reading â€œLong Way Roundâ€ by Ewan McGregor and Charley Boorman. Someday Iâ€™d like to take an extended trip on a bike too. Seems like a neat experience. 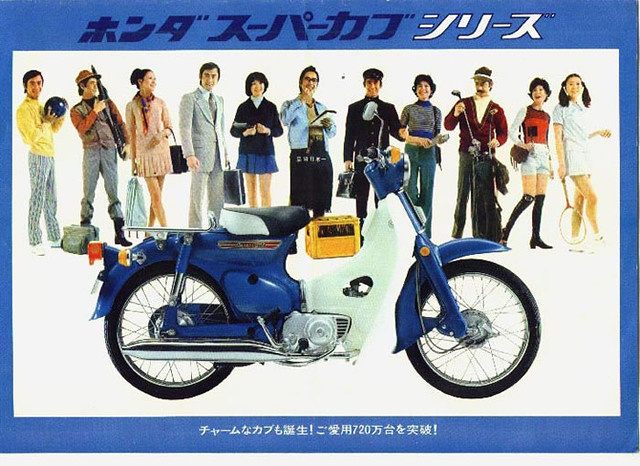 The fender that arrived for my C70 should fit on nicely. The mounting holes on the top are placed differently than on the original fender, but the forks actually have bolts in the correct place for the replacement fender as well, so it should work out. The only problem is that I only have about an 8â€™x4â€™ space to work on it in the garage. The rest of the garage is filled with our moving stuff. I need to stop by Home Depot to buy some bags of dirt to make my homemade motorbike jack to lift the front of the bike up. Then I can change the front tire,
and replace the fender at the same time. Speaking of the fender, the color turns out to be a really nice dark greyish-blue. It is actually one of the colors I was thinking of painting the bike, so I guess itâ€™s decided. I shouldnâ€™t have any problem finding a matching color at the auto parts store. The photo above is what my bike will look like. I am even going to paint the side covers white to match the legshield. I just need to search for a luggage rack like the one in the photo, but it shouldnâ€™t be too hard to find since they are still produced in Japan.

The other night I decided to take the C70 out for another spin. The cub turned over and started right up, but then it died after about half a minute. I couldnâ€™t get it started again, so I wheeled it back towards the garage. Before I actually put it in, I decided to try one last time, and lo and behold, it started up. This time, the bikeâ€™s weight and/or metal mass was enough to trip the entrance gate, so I was cruising around the neighborhood in no time. It was about 85Â°F out, so the wind felt really good. It is so much fun to ride, even if itâ€™s only at a rather tame 30mph. I think it could probably hit 40mph easy, but I will wait until I put on the new tires before I try. I also need to get a new chain, because the one that is on it now is stretched and rubbing against the chain guard. I also fixed the right rear signal: the bulb wasnâ€™t contacting the wire properly. Anyways, the ride was tons of fun. I rode around the old neighborhood, since it is not busy at all and I can have the whole road to myself. I am getting used to riding it, and shifting is becoming second nature. My friend Chris told me a bit about the correct way to apply pressure to the brake on a motorcycle, so I kept that in mind when slowing down at the stop signs. I moved my bike from the balcony closet to the garage last night. I figured I would take a picture of it while it was in the livingroom. Before I took it to the garage, I went for a little spin around the neighborhood. I learned a couple thingsâ€¦ first, the bike is not big enough to trip the parking gates. I had to wait for a car to come along and open them. Second, the light for the speedometer is out. It probably just needs a bulb.

When I came back to the parking lot, I met a fellow tenant who was getting off of his Yamaha YZF-R6. We chatted a bit about our bikes and he took a photo of my C70 with his camera phone. It turns out that he had never ridden a motorcycle before he bought his, just a few months ago. He said his friend had one, so he got one too. He didnâ€™t take the MSF class, and failed his written test, so he has to go back tomorrow to retake it. Speaking of the MSF class, I am going to take it in a month or so. It should be really fun.

I found a blue fender for a C100 cub on Ebay today. It should fit my bike, but may need some slight modifications, which might be as simple as drilling a couple holes in it. The C70 has I think five plastic body parts: the legshield, front fender, left side cover, right side cover, and lower handlebar cover. With the exception of the handlebar cover, all of those have some sort of damage to them on my bike. The side covers just have small hairline cracks, but I can live with those. The legshield is cracked in a few places, and I will eventually replace it, but am in no rush. The front fender had a crack in the very back, and it was ok, but then during the move, the fertilizer spreader in the garage fell back, and the handle whacked the fender right on top. It actually punched a hole through the top, and cracked it pretty good. I taped it up with packing tape, but it looks pretty bad. Hopefully the new fender will work out nicely.

I started it up today and ran it for about 20 minutes. In the storage closet off of the patioâ€¦ I canâ€™t wait to get out of our apartment and into our new house. I got new tires for the cub, but no tools or space to put them on. 🙁 Anyways, I am keeping the cubâ€™s battery charged, and it started up on the second try today. Lots of smoke came out of the exhaust at first. I hadnâ€™t run it in over a month. Itâ€™s a great little bike with a super engine. I love it.

After waiting for three months, the Michelin Gazelle tires I ordered for my C70 arrived at the shop. Apparently a big batch comes over from Asia to the distribution channels here in the states only a few times a year. But, the bike is in storage while we wait for our new house to be built. I will have to put on the new tires later in the year. 🙁 Which reminds me, I gotta charge the batteryâ€¦

I used to have this on my old website, and just recently found it again. Itâ€™s a quick Honda commercial featuring the Supercub. Speaking of the little Honda motorbike, I was riding around the neighborhood at lunch, and it was totally fun. But the carb needs adjustment because the engine is not getting enough fuel at high rpmâ€™s. I am waiting for a kit that will replace all the parts in the carb that I suspect are a little clogged. I also got a new battery and it is charged up. Next I will put in the headlight, since putting in a headlight without a charged battery will blow the bulbâ€¦ I went home at lunch to work a bit on my C70, and guess what? It finally started up! When it came to life, my heart skipped a beat, it kind of scared me. Hehe. But it would only run for about 10 seconds or so before dieing. And there was a funny hissing sound coming from the exhaust, sort of like a pressure cooker. I suspected that the old muffler was clogged, so I straightened out a wire hanger and used it to clear the junk that was stuck in there. I think some wasps had made a nest in thereâ€¦ Anyways, after that, it started up so easily, and idled nicely. Thereâ€™s a small screw on the side of the carb you use to adjust the idle, and I got it dialed in pretty good. Since I inflated the tires the day before, I decided to give it a go down the street. It shifted great into first and second, but I didnâ€™t put it into third gear yet. Iâ€™ll wait until I get new tires and a helmet. But I am stoked that itâ€™s running!!!!

I love the Honda Metropolitan/Crea Scoopy with the hibiscus paint job.

My dad and I worked a bit on the supercub. We replaced the points, condenser, and did continuity checks on most of the electrical system. And finally, we got a spark going. Next we put in some fuel and tried to start it up, but unfortunately we had a fuel leak, and the gasket I replaced wasnâ€™t enoughâ€¦ The gasket actually worked fine, but there is another leak somewhere. It is going to require taking the carb apart and cleaning it again. The cool thing, though, is that when I kick the kick-start pedal, it sounds like it is trying to start up now.

It wonâ€™t be too much longer until it is running.