I finally got my tires mounted on my wheels. The original Metzeler Tourances lasted 600 miles which I hear is pretty good for Texas roads. I opted to have the motorcycle shop mount the new Heidenau K76 to the rear wheel since this is notoriously difficult to do by yourself. It’s possible but takes a lot of muscle. It has to do with the shape of the wheel which doesn’t have such a deep channel in the center. Anyways, the place I took it to charges only $26 if you bring in the wheel by itself. I really enjoy working on the bike as much as I can. I think it’s fun to figure out how stuff works; many times things turn out a lot simpler than originally thought. That’s the case with the way the wheels mount to the swingarm on the little GS. It’s very similar to my old Honda C70. 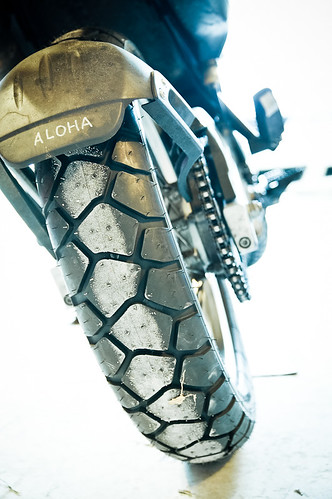 The Heidenau K60 Scout front tire I decided to mount by myself since it is supposed to be easier. I also wanted to make sure I knew how to do it in case I needed to on the road. Even though it is easier than the rear, the front still takes a bit of elbow grease, but there’s nothing magical about it. It’s just a matter of using the tire irons and getting leverage. Speaking of tire irons, I have a 16-inch Motion-Pro tire iron and two smaller 8-inch generic tire irons. The 16-inch is excellent and helps a lot. I highly recommend having at least one. I might get another one if I can find one for cheap.

I also use a lubricant on the tire called Ru-Glyde. It makes the job much easier! The tire will slip over the rim easier saving you a lot of time and power. I also heard that a warm tire is a bit more pliable than a cold one, but it was about 50 degrees today and I didn’t feel like putting the tire in the oven! But I finally got the tire on. Woohoo! The most difficult part was fishing for the valve stem! 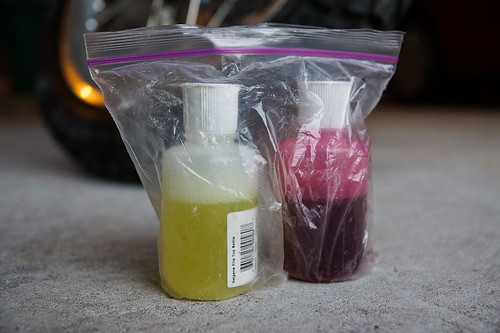 The next thing I need to do is balance the tire as best I can. I actually didn’t know that the tires have markings on them to show you where to line it up with the valve stem to get it closer to balanced. I might need to break the bead again and shift the tire a bit, then rig up a homemade tire-balancing solution. There is a guide on the f650.com site which seems to work well so I will give that a shot. 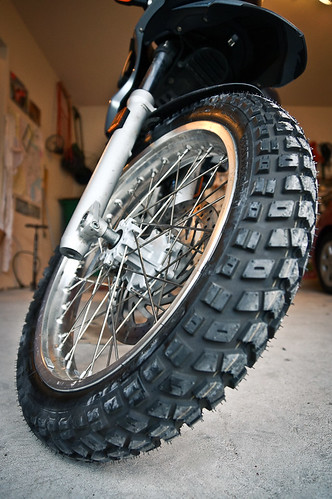 I can’t wait to try out the new tires on some dirt. It should be a bit more stable than the Tourances. They won’t last as long as the Metzelers, but I’m expecting to get about 7-8,000 miles out of them which I will be happy with!

I bought a 3/8-inch rod from the hardware store and used it to balance my tire. The BMW wheel has flat (non-tapered) bearings inside which supposedly make using a plain bar possible. Sure enough, it worked great. The tire easily rotated around and it wasn’t difficult to find the heavy spot on the tire, then affix the proper amount of weight on the other side. BTW, I went to CycleGear to buy some weights, but the guy there just gave me a strip of them for free! 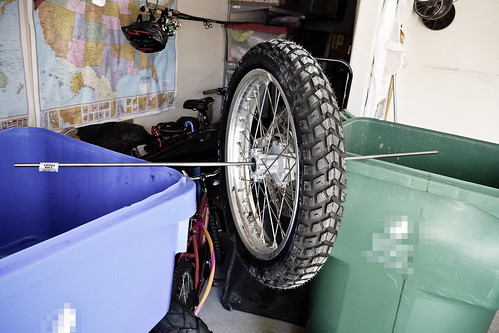