Cool vid of two 650 Dakars in the desert. 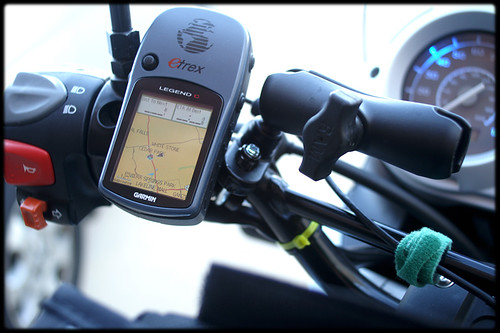 Today I bought a “new to me” GPS unit that I found on Craigslist. It’s a Garmin eTrex Legend C, which is similar in appearance to my old eTrex Legend, but has some important advantages. First, it’s got a color screen which is much easier to read in daylight. Although it is has less pixels, it presents the data better and the scrolling is much quicker. Another plus is that it uses the same bike mount as my Legend so I can just swap the backplate instead of buying a whole new one.

A huge advantage this unit has over my old one is that it has a mini-USB connection. This means I can connect it to my computer to transfer data back and forth easily. My old Legend had a serial connection only, and who the heck has a serial port on their computers anymore? The USB connection also gives the Legend C its biggest advantage–the USB cord is used as a power source. I routed a USB cable up to the handlebars and now the GPS has unlimited juice. No more worrying about battreries! FYI, the other USB cable is routed up into the tankbag, and I can plug my G1 into it. 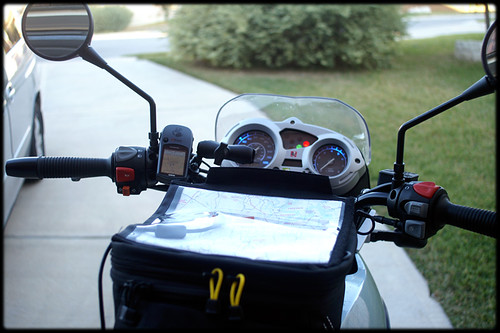 I’m still learning all the new features on the new GPS but there appears to be tons more fun stuff plus more memory for maps. Although this model is an old one (discontinued and pretty much obsolete compared to modern GPS units), it is going to be perfect as a trip computer, which is one thing that my bike lacks. And all for only $30!

A cool little video for those who like motorcycle adventure travel.

The “new” G650 GS has been announced, and it looks pretty cool. It’s basically the same engine and frame as before, but with updated body plastics, headlight, and dash. I really like the updated look, which brings it in line with the F800 and 1200 GS bikes. It’s got the asymmetrical headlights and a digital readout on the dash. Apart from those details, there’s a slightly smaller fuel tank, heated handgrips are optional, and instead of spoked wheels, they are cast. These may be an upgrade to some, or a downgrade to others. Still, I’m glad BMW is keeping the single-cylinder bike going and many parts should be exactly the same. I’m wondering if that two-tone seat will fit on my 2007 GS?