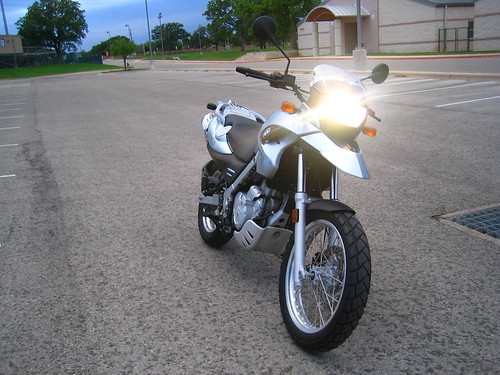 I bought a used (2007) BMW F650 GS on Saturday! Before I bought it, I met the previous owner at his house to check out the bike, and I was really impressed both with the motorcycle and the seller. He was really knowledgeable about motorcycles and knew a lot about the BMW. He showed me how to take off the center covers, inspect the battery, explained all the controls and suspension tweaks etc. Plus he was really helpful by riding the motorcycle to my house, which saved me a lot of money. I am so fortunate to find a really great bike and seller. But the bike sat in my garage on Saturday because I was so busy.

Sunday morning I woke up and was ready to ride the BMW for the first time. (Actually second time if you count the test ride down the street and back) The bike is so smooth and leaving the driveway and going up the cul-de-sac hill was super easy. The clutch is very forgiving and it is easy to find the friction zone. I got used to taking off from a stop pretty quickly. Basically, you need to accelerate sort of quickly so that you get some inertia and the bike becomes stable. If you are timid about it, you will kind of wobble and lean. I did that a couple times until I got used to the clutch lever and where the clutch engages. What’s cool about my bike is that the clutch lever has three positions so I was able to have the lever sort of close to the grip. The “little” BMW fits me perfectly. The seat height is relatively low, and the handlebars are at a relaxed position. My knees are bent at a comfortable angle, and rest lightly against the sides of the faux tank. Even though it’s considered a smallish bike, it still looked huge in my garage. Everyone who sees it remarks that it is bigger than they thought it would be.

The first place I went to was the middle school nearby. There was a light drizzle as I practiced some hard braking and emergency stops in the parking lot for a few minutes. After that I decided to head down Brushy Creek which is a really nice little road. Some dude in his SUV was tailgating me for a minute, but I refused to go over the speed limit, and eventually he backed off. The road was a little slick and I didn’t want to push it. I eventually crossed under I-35 and headed farther east towards the Dell Diamond. Even at 8am I could smell BBQ as I passed by the Salt Lick. On this stretch of road I realized that it seemed like I was going faster than I really was. Felt like I was doing 60mph, when I was only at about 45mph. The cars in the fast lane were whizzing past me. But the cool thing about the 650 was that it takes just a second or two to get up to speed. Then I found myself doing the speed limit, and cars were still passing me. I just kept to 60mph though and enjoyed the ride. This was actually the fastest I have ridden on a bike before so the experience was both exhilarating and frightening at the same time. It was also a ton of fun. In a few minutes I found myself in Hutto and decided to turn around. When I did that, the low fuel light came on (which meant I had about a gallon or 65 miles left) so I stopped at a gas station to fuel up. The BMW has its gas tank actually under the seat and the gas cap is on the side like a car. The faux tank actually houses the battery and other internals. It’s kind of a neat set up and lowers the center of gravity.

After the gas station, I headed home. I passed by another rider on his Suzuki sportbike and he gave me a wave. That was pretty cool. Later on, I passed a Harley, and the lady riding 2up in the back gave me a wave. I wonder if this will get old after a while? Anyways, on the ride I realized that it is so nice to not be limited to where I can go, unlike when riding the Honda C70 which has a top speed of 40mph. I still enjoyed riding slowly down the curvy Brushy Creek but it was great knowing I could open up the throttle a bit and speed off when I got to the 55mph zone.

I thoroughly enjoyed my first run on my new bike. I totally love it. Cannot wait to go out again!

7 thoughts on “First Ride on the BMW”