Lone Star BMW/Triumph recently hosted an off-road clinic given by RawHyde Adventures, which is an official BMW training center. The clinic is basically a short intro to what you learn at the full RawHyde Camp, and it was free so I made sure to RSVP as soon as I could. The clinic was held at the Capitol City Trap and Skeet Club which was about a half-hour ride from my house. 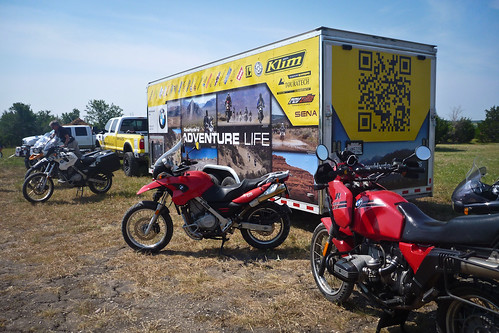 The class was scheduled to start at 10am and I decided to go early. I arrived at 9:15 and was glad I did. I was a little nervous riding in since it was on gravel and I’m not so comfortable riding on the stuff, especially at slow speeds. By arriving so early, there wasn’t a huge audience to scrutinize my riding ability! I really didn’t want to drop my bike just pulling into the place. But it was all good since everyone seemed pretty cool and probably wouldn’t care. We’re all there to learn, after all! (I did just fine, btw) 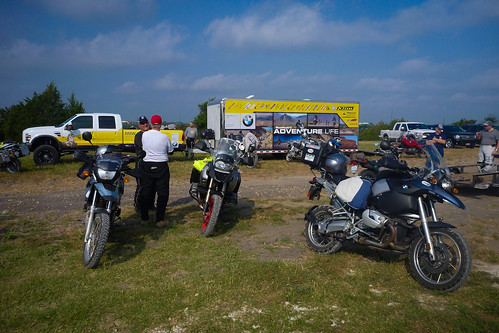 I was maybe the fifth person to arrive and got to chat with a couple of the riders. The cool part was checking out the other bikes, which were, of course, BMW machines. It turned out there were a couple Yamaha TW200s that Robert Krull (one of the owners of Lone Star BMW/Triumph) had trailered over just in case someone wanted to train on a smaller bike. There were several 650cc bikes like my own, but most were the big 1150 or 1200 GS models with a couple 800cc bikes thrown in for good measure. Besides myself, there were several other newbies in the group. Everyone was really cool and the two instructors from RawHyde, Shawn and Lance, put everyone at ease and made sure everyone felt comfortable. 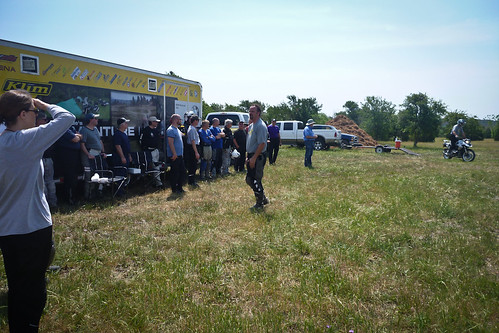 We started out with a general overview of the clinic, and then a demonstration of proper riding posture and technique. It was really interesting and neat to see some real experienced riders explaining how riding an adventure bike is properly done. Next came individual one-on-one bike inspections, where Shawn and Lance went to each bike/rider and evaluated the riding position, lever position, and made recommendations on any kind of upgrades we may want to make in the future. They also performed adjustments to pegs and handlebars right there and then if needed. It was so cool! When Shawn took a look at my bike, he recommended some lower pegs (which I knew about) and some guards for the radiator. He said that the 650 single’s radiator was prone to damage from the side if you dropped the bike. Other than that he said my bike was nicely equipped with the handguards, Heidenau tires, and bar risers. It was funny, but because I had taped over the Barkbusters logo on the handguards he asked what kind they were. When I told him about the tape, he (and the others standing around watching) said that was a cool idea. Apparently, other people felt like I did and would rather not have the big white advertisement on the front of the bike. We also aired down the tires to 25psi in preparation for the riding and learned how to disable the ABS systems on our bikes. Shawn showed me how to semi-permanently disable the ABS on the 650 by simply disconnecting the front sensor cable. Good to know! 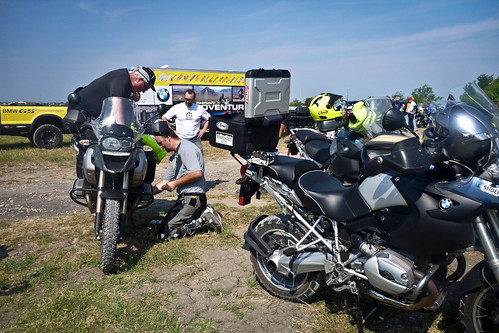 After the inspections were done, we hit the course for some training. This consisted of riding as slow as we could over the dirt/grass. The point of this exercise was to keep your focus towards the distance (don’t look down), get proper riding posture, and get comfortable using the friction zone. It was pretty fun, and riding around the small range was really confidence inspiring. The instructors said that each exercise builds upon the previous ones and that we’d be learning about 5 of the 30 or so techniques they teach at their full camp. 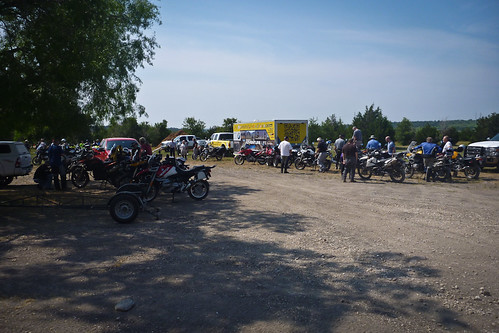 There were a lot of bikes at the clinic (maybe about 30?) so the queue was a bit long. But I have to say that I learned a lot just being in line. Moving forward over the uneven ground for 20 feet, then stopping, then doing it again was nice practice. Especially having to turn, while scooting along over small rocks and washes was kind of fun. I thought for sure that I’d drop my bike at some point but I made it through the day without any mishap! While in the queue, there was a bit of excitement behind me. I’m not sure exactly what happened but I heard a revving of an engine, then saw a bike on its side. Then I saw another bike behind it on its side as well, running into the first bike. It was just a small collision but I think one of the bikes had a broken auxiliary light. 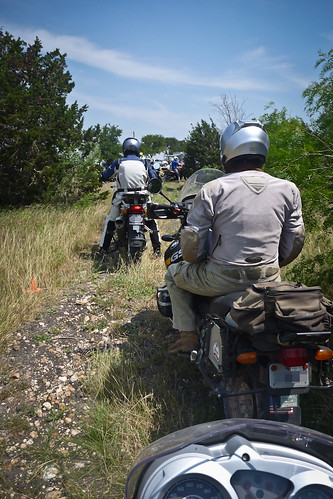 After another time around the range, this time with Shawn trying to distract each rider, it was time for a break. Burgers, beans, and iced tea were provided by Texas Rib Kings and we all sat at the covered pavilion and chatted about bikes and rides. It was fun and I met a few of the other riders. It was getting really hot out so the lunch was a good time to cool down and get hydrated. After lunch, there was another demonstration of how to pick up a bike that is on its side. The two ladies in the group each picked up the huge 1200GS on their own using the technique shown to us. It was pretty cool. 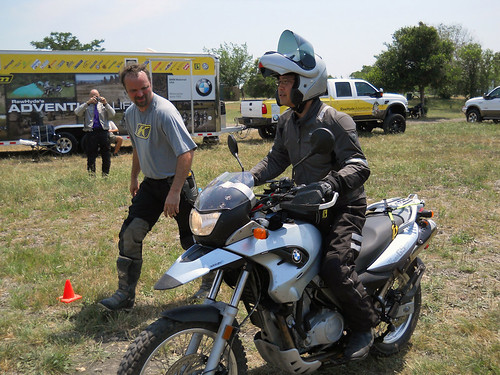 Back on the range our next drill was executing a “trail stop”, which is coming to a stop then accelerating again — all while standing on the pegs. We also were told to use only our front brake. This was really good because everyone got to put away the notion that you should never use your front brake on dirt. Sure, you can’t use it as forcefully as you can on the pavement, but it is effective. When I first did the trail stop, Shawn said I was stopping too slowly and that I should grab more brake. He said that if you come to a stop while deccelerating too gradually, you’ll lose your balance a lot quicker. So the next time, I braked a bit harder and sure enough, I had more balance and could easily do a trail stop. This stuff really works! 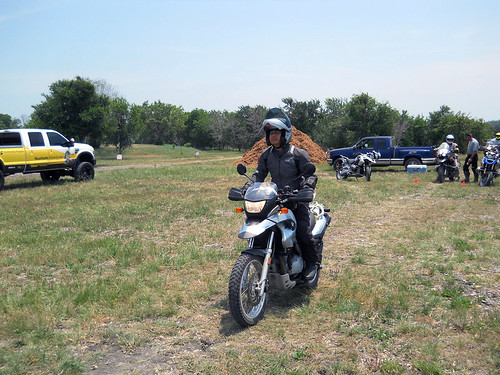 The next drill was the one I was really looking forward to: tight turns. This was an exercise in body positioning and counter-balancing, and also looking ahead to the next turn. I did pretty well at it although I did go through the turns a little fast. But the more I practiced, the better I got. There was a second part of this course which was a series of even tighter turns, but I wasn’t successful in pulling those off! Some of the other riders had a ton of skill and could do those turns on their monstrous 1200 GSs. It was really impressive! I did stall my bike’s engine a few times during this section of the clinic, but I always started it up while still standing on the pegs. I got pretty good at that!

At around 2pm, the clinic came to a close and everyone packed up their things, aired up their tires, and rode off. It was a fantastic day and I think everyone enjoyed themselves. I know I did, and I feel like I learned a ton! I know that I can trust the bike more and that by using the proper technique, some of the things I was really worried about can be overcome. In fact, that apprehension that I had about arriving in front of all the other riders is gone now. And I’d love to take the full RawHyde Adventure Camp sometime in the future! 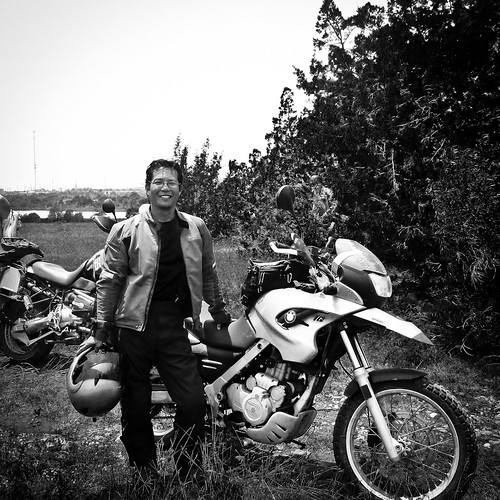 Some day, I’d like to ride my motorcycle around Big Bend National Park. It looks so fun. Check out the video below by YouTube user LoneStarAdv.