I started following Chris Sorbi’s round-the-world motorcycle trip in support of raising awareness for world hunger. It’s an amazing five-year journey for a great cause. He is riding a Suzuki GS850 and has a couple of really good videos that detail his setup on YouTube. Go check out his site at www.motorcyclememoir.com to follow his journey and donate a little money if you can.
I have an old Garmin eTrex Legend on my bike, but it’s really flaky. It sometimes just turns off by itself, and I’m not sure why. Plus it’s so old that it’s a chore to get the data off of it. I’ve been using my G1 phone in my car and figured I could use it on the bike as well, at least to record my tracks (routes I travel) using the My Tracks app by Google. My bike has the optional accessory socket but I needed to use a Powerlet cord to convert the BMW plug to a generic cigarette lighter socket, then plug in the USB adapter so I can run the cord to the G1. 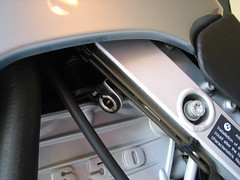 I originally thought that I would run the Powerlet cable to the handle bars and then attach it using cable ties, but after threading it up, I realized that the socket was too big and since the USB adapter would be attached, it just wouldn’t fit nicely. Plus I am keeping the G1 in my backpack/tailbag, so why should I run the cord up front, when the hardware will be in the backpack? I ended up just guiding the cord underneath the seat where there is plenty of room to put the socket and USB adapter. It’s well protected under there, both from the elements and from any tampering since you need a key to remove the seat. (Click the photos for a larger view at Flickr) 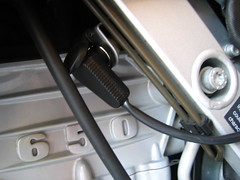 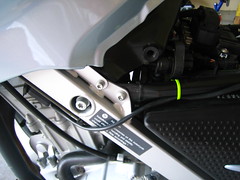 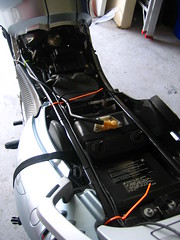 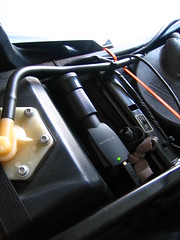 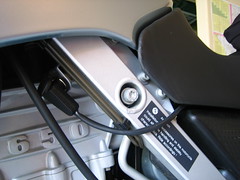 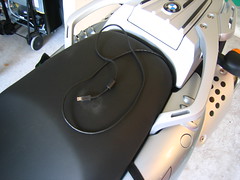 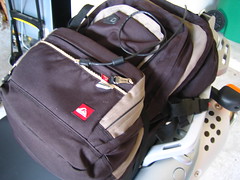 USB cord ready for the G1